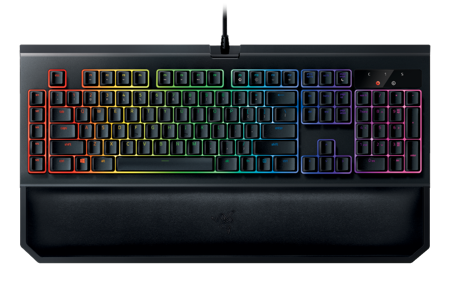 Razer is a name that is synonymous with quality gaming hardware, and it does not seem as though the company is about to slow down in its development of new peripherals anytime soon. Razer in a sense follows Apple’s footsteps by offering updated versions of an existing peripheral without any change in the name. This works great in the long run, since you do not need to keep track of the numbers (unlike the Samsung Galaxy S series which is about to embark on the 8th generation — it is simply nuts!). The latest peripheral to be updated by Razer would be the Razer BlackWidow, touted to be the best mechanical gaming keyboard, and then some.

Known as the new Razer BlackWidow V2 mechanical gaming keyboard, this particular range would now be on the receiving end of a brand new switch option, a magnetic wrist rest, not to mention cosmetic updates to keep up with the times. First launched 7 years ago, the Razer BlackWidow gained popularity in the world of mechanical keyboards, and with Razer churning out its very own mechanical switches in 2014, known as the Razer Green and Razer Orange switch, it set benchmarks in the industry that paved the way for gaming-optimized actuation as well as reset responsiveness and superior durability.

The Razer BlackWidow V2 will deliver with the best tactile switches thanks to the Green and Orange variants, in addition to the Razer Yellow switch. This linear and silent design will feature reduced travel distance so that keys can be pressed faster than ever before. Not only that, the new switch’s feel and properties would cater for FPS and MOBA players who tend to press select keys thousands of times with each gaming session. The rating of 80 million keystrokes is certainly more than welcome!

Press Release
Other features of the Razer BlackWidow Chroma V2 keyboards will include individually backlit keys, customizable lighting features, custom settings and lighting profiles which are integrated into popular game titles. Expect it to retail for $169.99 a pop.