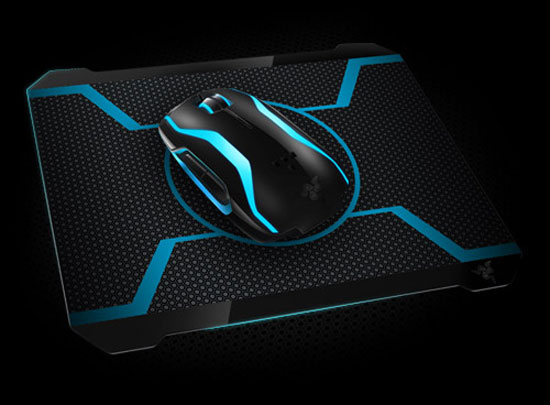 Razer has made some gaming peripherals, most recently BlackWidow gaming keyboard. Now Razer is planning on coming out with a computer mouse that is based on Tron.

Yeah, Tron is probably going to make quite a splash with the release of Tron: Legacy this holiday season. Some of you might remember in the original 1982 film how the characters rode these light-cycles around that could somehow make a wall behind them.

This Tron-branded mouse can be used with a specific mousepad to create a light-trail on the pad itself. There is a video of it after the jump, and you can see it leave a light trail, but it doesn’t stay there for very long.

This is a good example of marketing your movie merchandise to the right audience. What geeky Tron fan wouldn’t enjoy a mouse and mousepad that resembles the light-cycles?

However, I got to give a hand to Tron, as the film certainly gave rise to geek-ness in general. From it we have a lot of better CG special effects, the word “user”, and Jeff Bridges. Personally, I think it is a little too late for a sequel for this cult-classic film, but I’m anxious to see what Disney will pull off.