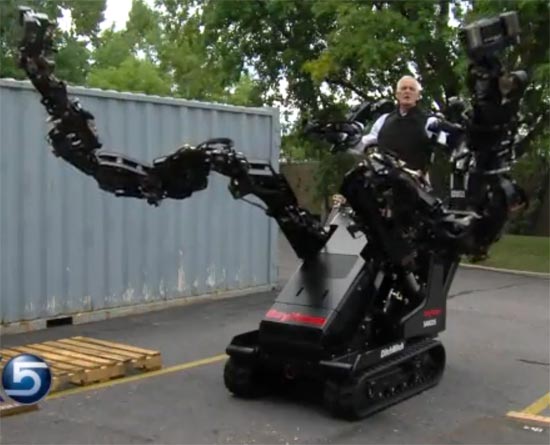 What you are seeing here is a modified Ditch Witch from Raytheon-Sarcos, and it is essentially the top half of a Power Loader from Aliens.
As you might have guessed, it gives a user’s upper arms superhuman strength. In case you think you might need crane operator training to operate this, you are wrong. All you need to do is use your own arms, and the metallic arms match.
You can watch the video after the jump, and it shows how easy it is to use. I have no idea how heavy those sheets of metal are, but I’m guessing that you don’t want to haul them without some machinery. I have to admit that I didn’t see the comparison between the movie Real Steel and this, but I would pay to see two of these robot arms fighting it out in real life.
In addition to the operation of virtual arms, the designers hope that an operator could operate the device from a distance. So if you need to clean up radioactive water at a nuclear site, you can operate these arms from a non-irradiated zone.
I don’t know whether or not you would have the same feeling as operating it from a distance. I would like to see these on construction sites now, holding steel girders under one arm and a rivet gun in another. Oh man, I love what science fiction robot movies have shown us.