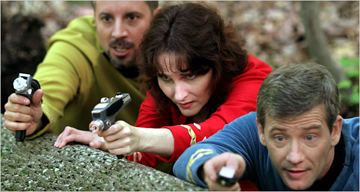 Defense missile contractor Raytheon has developed a ray gun … sort of. Called a “less than lethal directed energy application,” (or LLDEA for you military anagram geeks) the “Silent Guardian” causes an instinctive flight response in it’s intended victims by a focused “millimeter-wave” beam of energy that produces intense pain. And since it only penetrates the skin to 1/64th of an inch, it doesn’t leave a mark.

It accomplishes this thanks to extremely high frequency (EHF), millimeter waves — which are similar to, but slightly shorter in wavelength to microwave energy which is employed in other weapons research. EHF waves have traditionally been used in such applications as radio astronomy and remote sensing. In addition to it’s “trek like” phaser applications, the military is also working on a more broad application for crowd control and interdiction which is known as the Active Denial System. Capable of inflicting limitless, unbearable pain, the ADS can unleash a wave of agony upon a force or crowd from a distance of over 250 meters.

Beyond the concept stage, the Silent Guardian and Active Denial System may be ready to deploy in Iraq and Afghanistan immediately to handle insurgencies and unpopular crowd uprisings.