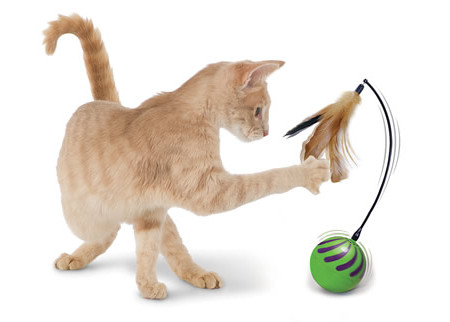 When it comes to keeping your pet entertained, it does not take too much actually. For instance, dogs who absolutely love to fetch can basically do that all day long, so much so you might eventually end up wanting to purchase a particular device like the iFetch toy. Having said that, cats are a slightly more different proposition from that of dogs – they happen to be masters of their own fate, and do not really bother too much about their human owners (or rather, servants from their own perspective). Having said that, this does not mean you would neglect the play part of their psychological make-up, which is where this $19.95 Random Motion Cat Toy comes in handy.

The Random Motion Cat Toy happens to be an electronic cat toy which is capable of providing erratic spinning motions. It will, of course, mimic the movements of butterflies or birds, helping to promote exercise as cats attempt to capture the feather wand as it randomly turns and flips around. It is appropriate for use on any flat surface, and the weighted base itself rolls as it wobbles. The feather wand will be screwed into the base, ensuring that it does not detach during rambunctious play, while the feather is capable of surviving virtually unlimited swats and captures. Powered by a couple of AA batteries, this is going to be a whole boatload of fun.