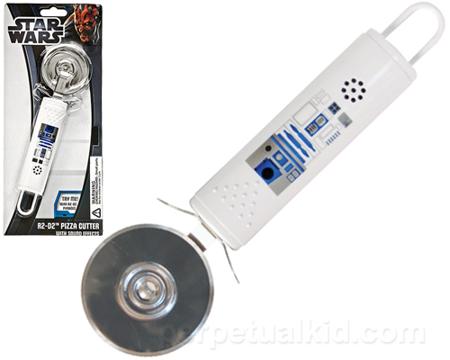 You can say that R2-D2 is the one major Star Wars character who does not have the emotion of a human, and neither does it have the power to manipulate the Force, but it has done more than its fair share in order to make sure the good guys always win, before the Emperor ascended his throne and ruled the galaxy with fear, and after that as he helped out the Rebel Alliance. Well, if there is another thing that R2-D2 might help you in your home would be this – to be able to ensure no fights break out among the family as it goes about its business, cutting your pizza perfectly. After all, how can anyone have anything against the $19.99 R2-D2 Talking Pizza Cutter?

The R2-D2 Talking Pizza Cutter will naturally come with its fair share of sound effects, which means it runs on some sort of power source. Of course, since there are no X-Wings in existence just yet, don’t bet on a mini-sized nuclear reactor powering the R2-D2 Talking Pizza Cutter, but rather, it would go around its business thanks to a trio of LR41 cell batteries that were included right out of the box to get you started there and then. For those who are a fan of pizza as well as Star Wars, this is definitely the droid you’re looking for!