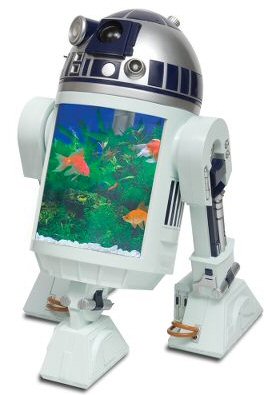 We’ve featured a fair few interesting, tasteless and bizarre aquariums here on Coolest Gadgets but this is probably the nerdiest yet (thanks Critiker), the R2-D2 Aquarium.

Modeled after the most well-known astromech droid in the galaxy, this R2-D2 holds a 1 3/4-gallon aquarium tank in his central compartment, ideal for a small freshwater family of goldfish, gouramis, or tetras. The domed head rotates with any vocal command you issue and he utters his familiar “bleeps” from the Star Wars movies. His radar eye houses the eyepiece to a built-in periscope that provides an intimate view of the aquatic activity below, allowing you to watch your charges swim towards the food you’ve dropped in from the dome’s removable feeding door.

You can buy the R2-D2 Aquarium from Hammacher for $129.95 found via our friends over at Critiker.