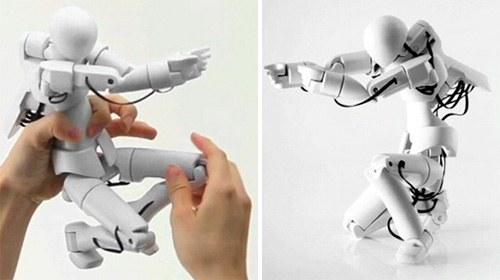 As someone who has worked with 3D graphics before, I never really got around to posing human characters. I suppose that I could have done better if I had the QUMA (pronounced Cooma).
As you can see, the QUMA is essentially one of those small wooden posing statues from art class with a bunch of sensors on it. It is good for when you want to put your 3D digital characters in positions that are tough to model. Provided they are human.
There is a video of it after the jump, and you can see how the digital modeler can create some basic action poses. It looks like the 3D video footage can be turned into 2D, so maybe this will be a tool used for comic books.
I wonder if this is how Pixar does their animations, when they are doing movies about humans and not cars. Speaking of which, have you seen the preview for the Pixar film Brave, coming next summer? It looks pretty good, and dramatic as well. It is about time Pixar pulled out of their sequel funk that they have been mired in for the past two years.
This QUMA is really just one example of how we have to figure out how to put 3D interfaces on 2D computer screens. At least until we have touch-sensitive holographic interfaces, at least.