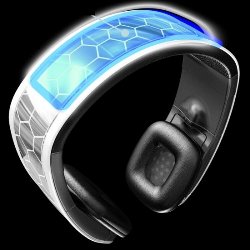 Of course, this isn’t the first time that we have reported on solar-powered devices that are designed for Digital Audio Players (DAPs), but the Q-SOUND, a concept device that is part headphones and part headband, definitely makes the most of days when the sun is beating down on your head.

As you can see, solar cells are placed directly on the user’s crown, absorbing valuable rays for power. Some of you might wonder how these solar cells can be curved when most are generally flat and stiff, but these cells are constructed of flexible plastic that uses silicon solar cells.

Shepeleff Stephen, designer of the Q-SOUND, has said that one hour of sunlight is sufficient to provide the user with 2.67 hours of running time. The headphones should be able to hold a forty hour charge with the two removable NiMH batteries.

Time will tell if this concept becomes reality, but I would not be surprised if the demand for solar powered mobile devices increases in a “greener” world.