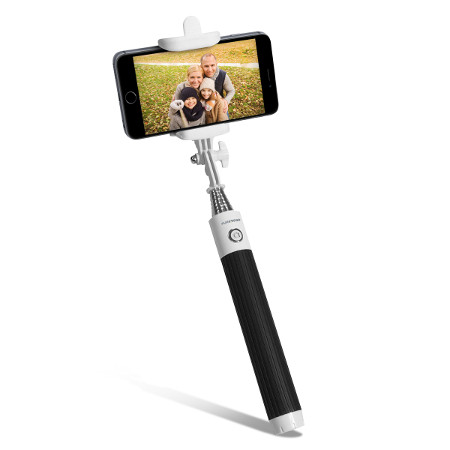 Forget about the Age of Ultron – it is the age of selfies that are taking over the world, and of course, when one uses the term selfie here, it is used in a very loose manner since it would also include “wefies”, which would be the capture of not just your very own photo, but that of other people as well within the same group. Having said that, most of the time, those of us who happen to be operating on an extremely tight budget would not mind having part of our arm being in the selfie, which is to be expected. Perhaps you might want to crank things up by a notch or two in terms of professionalism with the Selfie Stick by PureGear, which should not be mistaken for a Selfie Remote.

Yes sir, it is named in such a simple manner, that there should be absolutely no doubts whatsoever as to what this particular Selfie Stick is capable of. Being lightweight in nature, as it should be, this Selfie Stick from PureGear happens to be a foldable monopod which can be easily stashed in any purse or luggage case without missing a beat. Basically, it can be called into action in a jiffy whenever your shutterbug nose sniffs out a photo opportunity that is worth capturing.

In order to use the stored Selfie Stick, just extend the collapsible Selfie Stick anywhere between 7.8 inches to 2.8 feet, and voila! You are good to go. Needless to say, the Selflie Stick from PureGear will play nice with not only the iOS platform, but also with those who are rocking to the Android mobile operating system, too, since it will be able to fit any device between 2.1” and 3.3” wide.

Selfie Stick was also specially designed with a built-in 270˚ tilting phone clip so that it can capture breath taking panoramic shots. In addition, this Selfie Stick sports integrated Bluetooth connectivity to deliver one-button operation for simple selfie snapping, while the built-in rechargeable battery that has its very own cable will let you power up the Selfie Stick at a moment’s notice. It will arrive in black or white for $29.99 a pop.