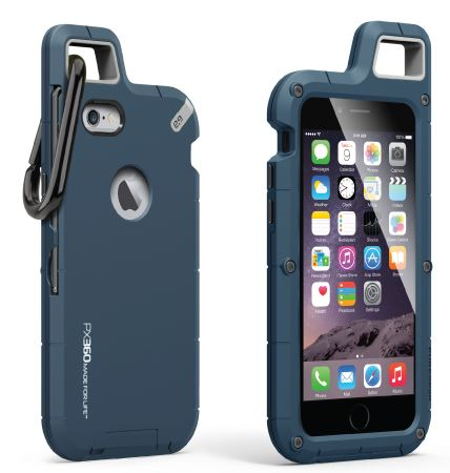 So, you have finally decided to take the plunge and pick up an iPhone 6 for your mobile communication needs. However, you might have also wondered whether getting a protective case of sorts for the spanking new handset is well worth the effort – after all, you do not want to minimise the amount of effort put in by Apple’s designers when it came to the iPhone 6’s svelte and rounded edged body, right? Covering it all in a protective case is not going to do much should you want to flaunt the handset. Well, there are times when a compromise will need to be reached – and thanks to adrenaline junkies who would want nothing but adventure and thrills, it is imperative that the PX360˚ Extreme Protection System from PureGear is revealed.

The PX360˚ Extreme Protection System will target iPhone 6 owners, where it features a rugged, impact resistant, screw-on design which has been specially engineered and tested to handle various types drops. The case itself will come with port covers that will keep dust and dirt out of lightning/audio ports, where there will also be an attached carabiner which can be used to clip the iPhone 6 to a belt, backpack, purse, stroller or basically any other kind of gear.

Want to go hands-free in double quick time? That is not a problem at all, since you do not have to worry about your smartphone falling to the ground. The PX360˚ will also be accompanied by a handy installation tool which doubles up as a kickstand.

Thanks to the PX360’s innovative design, you get something that is not only slim, but durable to boot. The case itself is perfect should you head to the cliffs for some rock climbing or mountain biking, or even if you happen to be an avid skateboarder. Heck, bring the PX360˚ Extreme Protection System along with you if the most exciting thing you do all day is to hit the road running.