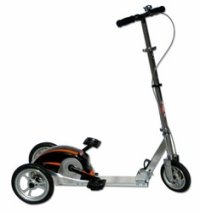 Remember the panic that gripped many parts of the world last year when oil hit record high prices of nearly $150 a barrel? Taking your car out for a spin then was a much slower affair from the days where fuel prices were dirt cheap (or at least, more affordable), as you realized that your foot is not made out of lead after all and there is no need to floor the accelerator each time the traffic lights turn green. Well, many people have even resorted to taking the public transport at that time as well, while others decided to go green with a bicycle instead. Human-powered transport seems to be the way to go forward, but with lower fuel prices right now as things go back to normal, will the Pumgo Scooter be able to stand a chance? It will be introduced at the New York International Toy Fair on February 15 -18, 2009, so if you’re interested to take a first hand look at it, head on to the Javits Convention Center during those dates.

The Pumgo Scooter features a couple of reciprocal stair-climber like pedals that drive the scooter forward, and it has taken five long years of development to roll off production lines. Touted to be one of the most, if not the most innovative scooter ever to hit the market, the Pumgo Scooter has been given the thumbs up by authorities in the medical field for its ability to work the body’s core for a complete workout. According to Dr. Batchelor, an Atlanta sports medicine doctor that specializes in the treatment of athletic injury, “Riding the Pumgo simulates the feeling of being on a stair climber, skateboard, surfboard, and bicycle all at the same time. Bowling, golf, push scooter riding, and skateboarding are all exercises that only work out one side of the body, leading to lower back pain and muscle imbalance.”

Just don’t blame us if you get dirty looks from your co-workers for turning up in a sweaty suit at work as you ride the Pumgo Scooter there.