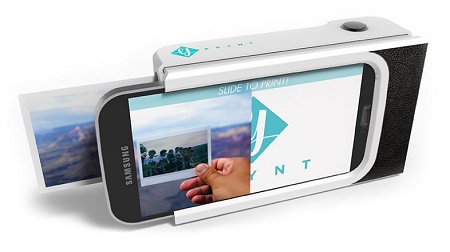 There comes a point after you’ve taken so many thousands of pictures that you realize you don’t have any hard copies of the moments you’ve captured. One wrong click or a social media site shutting down permanently could mean every photo you’ve posted could go up in smoke. There used to be a bigger emphasis on having printed photos, but as we move everything online we don’t feel as as much of a need for it. Well, until it’s all deleted anyway.

If you know you’re going to have some moments you’ll want prints of, but are afraid you’ll never get around to printing them off, then why not get a Polaroid camera? Let’s be real, not too many people would want to carry around another camera when they’ve got their phone, so the Prynt Case is an excellent way to bridge the gap. This is a smartphone case that will allow you to use your phone like a Polaroid camera. Simply plug it into your phone, put in paper, take a picture and it will immediately print a color photo on the spot.

This is soon to be a crowdfunding campaign that will have the case available for $99. There’s not too much information on the website, but you’ll have to be mindful of keeping the case charged (presumably), and purchasing paper to keep your ability to print hard copies. This should work with iPhone and Android phones, though there will likely be a limit of screen size.