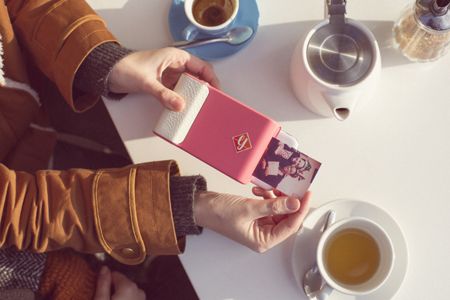 When you purchase a spanking new smartphone, it is more or less a given that you would have taken the relevant steps to ensure that your precious new purchase would be well protected. Obviously, this means having to actually purchase some sort of smartphone case for it. Which is pretty much a damper at times, since part of the reason as to why you paid so much for the handset in the first place was for its design. A smartphone case would clearly cover up whatever nice design details there are about the handset. Well, all for a good cause, right? The Prynt smartphone case will cater for a unique niche – as it does away with the need to actually tote around a mobile printer whenever you would want to print out that recently snapped photo. It offers protection for the handset, as well as the capability to print out photos right on the get go.

Of course, this is not a released product just yet, since it has just launched on Kickstarter, and there are hopes to raise a whopping $50,000 on crowdfunding site. Early bird pledges for the Prynt smartphone case begins from $49, and this is truly a first of its kind peripheral which will be able to make the images come to life whenever it is scanned by your camera, since it will transform them into a short augmented reality video that can then be played and enjoyed on your phone.

You “wear” the Prynt case on your smartphone in the same way as that of an ordinary phone case, although it does comes with the ability to print images which were snapped by your smartphone. All that you need to do is press print, and the image will then be printed out in a matter of 30 seconds, now how about that? Prynt’s augmented reality function will also be able to transform one’s images into video clips whenever they are scanned by your phone’s camera.

This is an added advantage which has been previously been unavailable in the past – as filming each segment that accompanies individual photos means your photographs would end up as the cover of a digital story, where your handset then plays them when the image is held to the camera. Expect Prynt to arrive in pink, white and blue shades, and it will be compatible with the iPhone 5, 5S, 5C, 6 and Samsung Galaxy S4 and S5, and shipping is tipped to happen some time in summer this year.