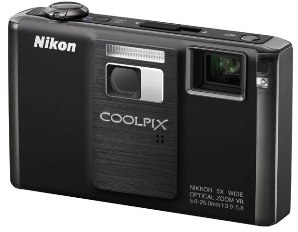 I’ve covered mini-projectors several times on this blog, greatly anticipating the day when every consumer has one. Yesterday, a landmark was made as Nikon announced that its Coolpix S1000pj will include a miniature LED projector.

This 12.1 megapixel camera comes with a 2.7 inch LCD viewscreen, a 5x wide-angle NiKKOR lens, and can capture HD video at 1280 x 720 pixels. Oh, by the way, Nikon also put out three other cameras, but who really cares about that, let’s talk about the projector on the S1000pj!

All the user needs is a flat surface and he or she can beam their images to a 40-inch size. The user can also mix music, and create effects along with transitions for these pictures.

So, is this the beginning of a new age of photography? In all honesty, I kind of hope not. After all, we already live in an age where people who want to share their photos can just put them on their iPod, or just show them on the digital camera itself. I mean, you could practically show a picture of you sharing your pictures.

Does anyone want to be the annoying guy or girl who just “has to” show his or her photos to everyone? Now that person is going to have a captive audience as they projecting their pics on any flatscreen nearby. My advice: have an excuse ready to leave the room.

Of course, current miniature projector technology has always been somewhat weak at best. I’m guessing that the S1000pj will seem antique within a few years. You should think before you purchase one, as it will set you back about $430.