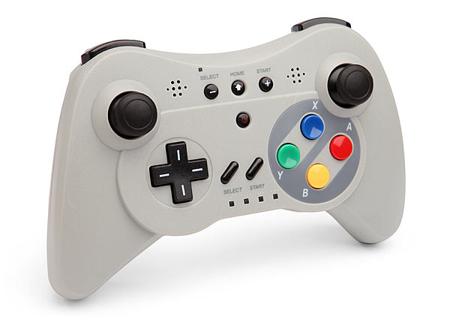 Avid gamers will know that there is nothing quite like having a decent set of hardware or peripherals to go along with your video game console, as sometimes, the stock controller might be decent enough to use, but you feel as though it lacks a certain sense of “Oomph!” that you would like to see and feel. Thinkgeek has got your back with the $39.99 Pro Controller U For Wii & Wii U, as this multi-function controller does not only play nice with both the Wii and Wii U, but it will also be able to handle games on the Android platform too, now how about that?

The Pro Controller U will merge a Wiimote and Wii Classic Controller, and when it functions with an Android-powered device, it will rely on Bluetooth connectivity to get the job done. Specially manufactured to be sturdy in nature, this third-party device is comfortable to hold, accurate, and pretty clever. All it takes is a switch flip and your Wii U will detect it as a Wiimote. Flip the same switch the other way, and the Wii U will be fooled into thinking that it is a Wii classic controller. As for the D-Pad, it is ideal for any Virtual Console title, letting you fire out hadoukens with impunity.

2 thoughts on “Pro Controller U For Wii & Wii U”