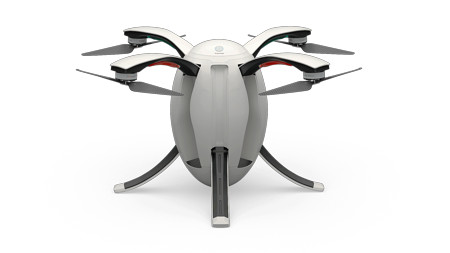 Drones are pretty big business these days, and you can be sure that there are many different parties out there who are more than willing to jump aboard the drone bandwagon just so that they can make a quick buck. Thankfully, the advancement of technology in this particular niche market has grown by leaps and bounds, so much so that having a device that flies around while capturing videos and photos simply will not do any longer. Heck, the landscape has altered in a way where design, stability and quietness as well as battery life do play a very important role – and Powervision Robot’s first foray into this market ain’t too shabby at all with their maiden consumer drone attempt, calling it the PowerEgg drone.

The PowerEgg drone might remind some of us of the pods that hold them nasty Facehuggers from the Alien franchise, but thankfully for the world, you will not find those disgusting creatures within, but rather, all sorts of electronics that will be able to help you get that money shot from above – be it whether you are a budding videographer or a seasoned veteran.

Sporting an innovative “egg” design for compactness and stability, Powervision Robot has taken its experience in the industrial drone segment and included it into their first consumer drone. The PowerEgg, as its name suggests in a rather obvious manner, features an innovative egg shape which will be aesthetically different compared to the numerous X-shape four-axis drones that are sold on the market at the moment. This would allow it to be foldable and easy to transport, as you can simply throw it into a backpack and be on the move. Sure, it might not be as small as TRNDlabs’ offering, but it is certainly unique enough to warrant a second look.