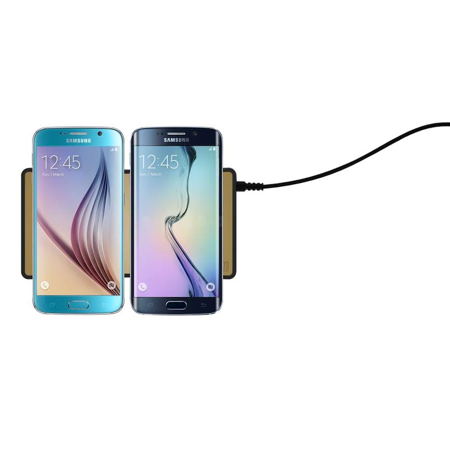 While we have wireless networks, wireless keyboards and mice, and even wireless speakers, the world of chargers do seem to be pretty much tethered down. In fact, wireless charging does seem, on paper, to be the way to move forward (such as Samsung’s monitor that supports wireless charging), but this does not mean that the idea of it all has caught on. In fact, wireless charging can be said to be in a very niche position at this point in time, but thankfully, there are companies out there that continue to endeavor to bring changes – positive ones, to the industrial landscape, and PowerSquare is one of them as they deliver what they deem to be the world’s first position-free, Multi Device Wireless Charger to the U.S. market.

PowerSquare’s Tango Wireless Charger will make use of breakthrough adaptive position-free technology in order to alter the way that smartphones are charged. Having said that, I would presume that this would be done first for folks living in the US, and if it catches on, Europe would be next, followed by the rest of the world.

PowerSquare’s Tango will bridge the fundamental gaps in wireless charging by being the first in the market to allow for free positioning and charging multiple devices simultaneously. Among the key features would include a generous sized charging area that does away with the need to properly align the phone on the pad, an optimized design to charge a pair of devices simultaneously, as well as compatibility with all Qi compliant devices (now this is certainly a huge plus point), as it results in the extension of the enhanced user experience to all early adopters of wireless charging technology.

Those who are interested in PowerSquare’s Tango will be able to place their pre-orders on the website for a promotional price of $79.99, where the initial batch is set to ship early next month.