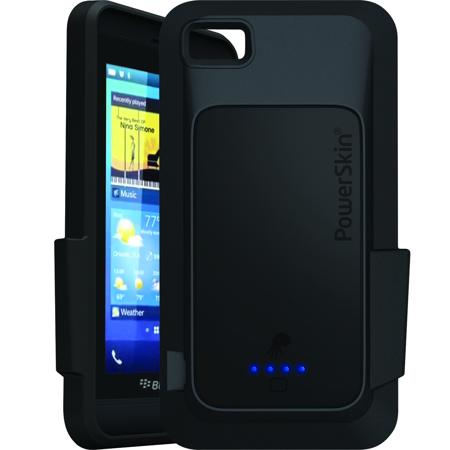 Each new smartphone purchase tends to be accompanied by a slew of accessories purchases. After all, it makes perfect sense, you too, want to make sure that the smartphone in your possession remains nice and in pristine condition, free from scratches and being able to withstand knocks and drops, especially those tend to happen when you least expect it to. Now, cases for smartphones are dime a dozen to choose from, and most folks are spoilt for choice, too. PowerSkin is an old hand at offering protective case choices for smartphones of all shapes, sizes and makes, and this time around, they would concentrate on the BlackBerry Z10, with the new PowerSkin BlackBerry Z10 NFC-enabled battery case.

The name itself does give away just as much, where your BlackBerry Z10 will soon not only gain all round protection from the majority of drops, nicks and knocks, it will also be on the receiving end of a big boost of power, all crammed into a single piece, featherweight design. Shaun Ng, Product Manager for XPAL Power, said, “PowerSkin dominates the battery case market in the Android and BlackBerry space. We take pride in offering the widest selection of options in a market traditionally saturated with solutions only targeted toward the Apple user.”

The Z10 PowerSkin will feature a one-piece, soft silicone exterior which is not only shock-proof, but dust-proof as well, and it will just add an additional 88 grams to the entire weight of the smartphone. That should not weigh you down by too much, no? There is a built-in 1500 mAh rechargeable battery which will further be able to extend the phone’s power by up to another 60%, and you will be able to control the flow of power using a press of the on/off button. The presence of a LED light strip on the back will be able to show off just how much battery charge is left, and the slim 20mm design also boasts of PowerSkin’s patent-pending technology that allows NFC transmission to pass through the silicone case, ensuring you will be able to perform quick information sharing in a jiffy. If you are interested, the Z10 PowerSkin will retail for $79.99 a pop.