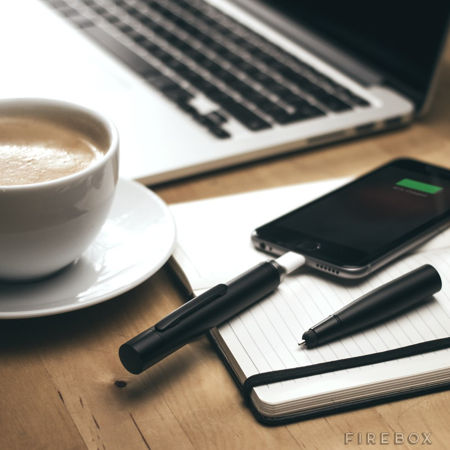 Normally, when we talk about having emergency power, it might be meant in a political sense – where a pen would come in handy then, to sign into effect such emergency powers. However, with the £24.99 Power Pen around, not only will you be able to leave your John Hancock on important documents that warrant your attention, it will also carry a secret within that gadget lovers will absolutely crave for – a hidden 700mAh battery that functions as the ideal emergency top-up.

This is a stylus, ballpoint pen and smartphone charger, all rolled into a single device, which means you no longer need to borrow a charging cable (or a pen for that matter) from anyone else ever again. After all, with the pen and a charger being one of the more commonly borrowed items at offices or camps, with low return rates respectively, it makes perfect sense to own your very own without having to go through the hassle of borrowing from someone else. The sleek, brushed-aluminium stylus can have its tip swivelled to reveal a ballpoint pen. If you need to juice up a thirsty device, just twist off the other end and you would have gained access the built-in battery, where it features tips for both lightning and microUSB so that it does not matter whether you are on the iOS or Android camp, it has got your back covered. The Power Pen would charge up via USB when its own power reserves have been exhausted.