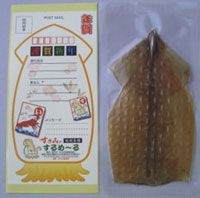 If you think that eating sushi is an adventurous culinary experience with all the raw stuff that are thrown your way, think again. Trust the Japanese to come up with totally weird and wacky stuff when it comes to food (gadgets and fetishes are another can of worms), and the Surumail postcards leave not only a note for the reader but doubles up as a welcome snack. These unique postcards are made from squid and are produced by the Susami fishing co-operative.

If you want to get down to the nitty gritty of what exactly the postcard is made of, you would be pleased to know that it isn’t just any ordinary recipe but the local seafood specialty that consists of dried surume squid (or better known by its scientific name Todarodes pacificus for you brainy types). This dried surume squid has undergone the flattening process and is subsequently vacuum-packed into the shape of a postcard along with an adhesive label for you to write down a short message, the postage, and delivery address.

Sales of the Surumail have been brisk as the fishing co-operative have already moved approximately 4,000 to 5,000 cards annually ever since they debuted on the market at the turn of the millenium. These postcards have even piqued the interest of giant corporations such as Microsoft and IBM, and may yet prove to be the savior of Japan’s ailing economy. Competitively priced below $3 a pop, these postcards can be purchased from the Susami post office and the JR Susami station in addition to the Susami fishing cooperative. Will Hershey’s follow suit and produce chocolate postcards?