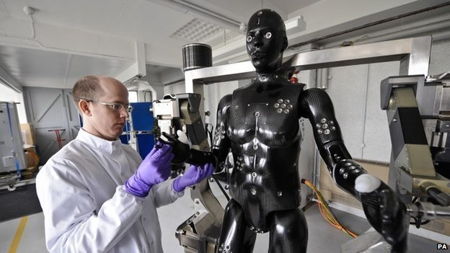 When it comes to modern day technology, especially in the field of war, you know that plenty of advances have been made, so much so that what used to be thought up of as science fiction can actually pass off for something real in this day and age. Well, surely all of the high tech military equipment that we have seen so far would have had to be tested, and do live soldiers actually have a role to play in all of it? Fret not, we have robots to get the job done for us. Case in point – the Porton Man, which is a robotic mannequin that is capable of running, sitting down, kneeling, and even mimic the movement of a soldier.

Recently unveiled by the Ministry of Defence, the Porton Man costs £1.1 million a pop, where it has been specially developed using Formula 1 technology, with the main purpose of its existence being to test out protective suits and equipment. Sporting more than a hundred sensors that are strategically located all over its body, these sensors would be used to record data during tests. Developers of the Porton Man claim that it would be able to help them come up with the next generation of protective equipment.

According to the Ministry of Defence, such an animatronic mannequin happens to be unique to the UK. It was developed for the Defence Science and Technology Laboratory (DSTL), where clothing systems for soldiers were tested against chemical warfare agents. The Porton Man robot mannequin is flexible enough to raise its arms to imitate signals given by soldiers, with the ability to march and kneel, too. I wonder just how lifelike its movement would be, and is it capable of bring the viewers into the uncanny valley? The Ministry of Defence has kept their fingers crossed that the latest generation of robot mannequins will be able to do its bit in helping produce a new, lighter protective suit for the military.