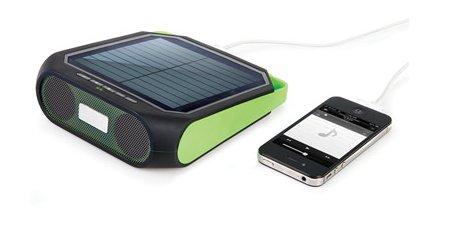 We live in a world where just about any mobile device that one carries these days – be they smartphones or tablets, are capable of playing back some music. And the amount of storage that these portable devices hold can reach insane levels, in fact, a whole lot more than your regular hard drive back in 2000. This would mean you would be spoilt for choice when it comes to the amount of songs that you can listen to, and chances are you would not have enough time to go through the entire playlist in a single setting. The thing is, sometimes, you want to share your eclectic taste in music with your mates, and your smartphone’s speaker just ain’t cutting it. Good thing there are alternatives out there like the $99.95 Portable Solar Powered Speaker.

The Portable Solar Powered Speaker not only lets you share your favorite tunes with the general public within an acceptable radius, but as its name implies, it is capable of offering an infinite amount of charging for your compatible power hungry devices – as long as the sun shines, that is. The speaker would pair up with a Bluetooth-enabled smartphone, tablet, or other wireless music player, where audio is played back via a 2.5”, 3-watt full-range speaker which delivers crisp sound. Its rechargeable battery has been rated to deliver up to eight hours of operation from a five-hour charge thanks to its built-in solar panel, and it comes with a rugged, water-resistant IPX4-rated exterior to boot.