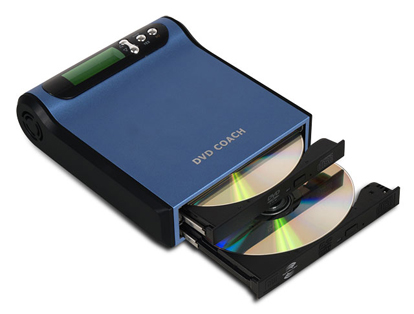 I know mobility is the hallmark of any cool gadget, but a mobile DVD duplicator? Why not, I guess. The EZ Dupe Ultra Slim Single-Target Portable DVD Duplicator touts itself as “world’s first Ultra Slim Portable DVD/CD Lightscribe Duplicator.”

The RIAA is going to love this.

It comes with two drives, which allows for duplicating DVDs at 8x, and CDs at 16x (RW speeds clock in at half that for both formats). It’s also multi format, meaning that it’ll burn both plus and minus DVD discs, in addition to CDs, Multi-session Photo CD™, and VCDs (does anyone make these anymore?). In addition, those who love to make “mix tape” style CDs can give dupes the personal touch thanks to its Track Editing Function.

And although it connects to a PC via USB 2.0 (why anything that uses video isn’t automatically firewire I’ll never know) it can also duplicate discs directly without PC connection. This is great news for music pirates who can pretend to listen to CD demo stations while they’re running dupes out of their messenger bags.

The Light scribe labeling option, however, obviously requires PC setup since it relies on software to lay out the label design before burning the image into DVD.

Slim. Portable. Duplication. Lightscribe. And at a speed that isn’t too bad for an “ultra slim portable DVD duplicator.” However, hovering at a price of somewhere between $400-$500, it isn’t cheap.