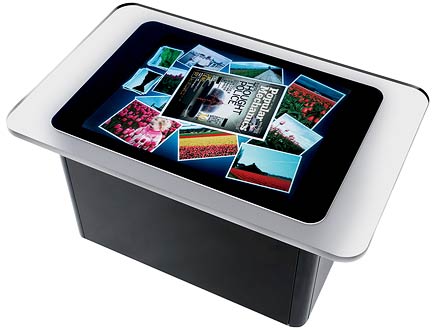 Popular Mechanics has announced their Break Through Award winners for 2007 and it’s no surprise that the iPhone (non-bricked version) heads the list, which includes hi-tech tables, high capacity flash drives, a gadget that gives your video game experience a work out, and a multi format HD player (it’s about time).

The Microsoft Surface received great praise from PM with it’s multi-touch support which allows collaboration and input from multiple users simultaneously. In addition, it wirelessly connects to portable devices and – in a cool piece of engineering and software design – photos spill out on the tabletop when a wireless camera is simply placed on top. Users can then rearrange the photos like they were actually there and – in a move reminiscent of Minority Report -‘slide’ them directly into another device.”
In what was dubbed the “hard drive of the future,” Samsung made the list with their 32GB SSD Flash drive. And with companies such as Alienware now shipping desktops with flash drives instead of hard drives (at an even heftier price than a standard over priced Alienware rig), it looks as if this breakthrough product is going mainstream with a bullet.

Users to get an actual, as well as, virtual workout by having to aerobics, yoga, even warmup stretching while balancing on Nintendo’s Wii Fit board.

And, in a long overdue move to end the HD format wars, LG gets the nod for it’s Super Blu Player which is currently the only player available that reads both HD DVDs and Blu-Ray discs. But what is truly stunning is that it not only upscales standard DVDs, but according to PM, it upgrades them to hi-def resolutions.

Finally, there are also the traditional auto and tool breakthroughs that round out the list for those who are more mechanically oriented, and not gadget obsessed. But that doesn’t make them any less “cool.”