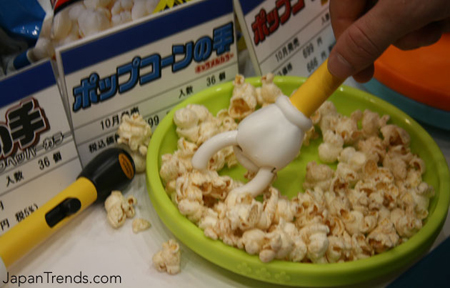 Popcorn is one snack that you can just continue munching without realizing just how much calories you have devoured – and that is a very dangerous thing in the long run since we all know that health is wealth, and getting on the road to obesity is not something anyone wants voluntarily. Well, here’s a novel method to control your popcorn intake – using the Japan-hailed Popcorn Grabber. Also known as the Potechi no Te popcorn grabber, it ensures you eat nothing but a single popcorn at any one time, doing away with your old habit of cramming in as much popcorn into your mouth as possible with each handful. Sounds like a cool idea, but chances are most people will get frustrated at its inefficiency after a few mouthfuls that they would probably throw it away and return to their old habits.

2 thoughts on “Popcorn Grabber ensures you limit your popcorn intake”