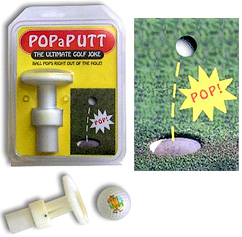 You know those mediocre movies and TV shows that have the characters playing golf. Of course you do. There’s always the sneaky player who actually sucks at golf but knows how to cheat. Somehow the ball will always roll that extra few inches into the hole and their opponent’s ball will simply stop an inch or two short, or if you can get away with it, it’ll just pop out if it ever gets into the hole. Since you already have your remote control golf ball to take care of the first prank, the only missing part is the POPaPUTT Golf gizmo. Don’t worry, it’s about half the price (and almost as cool.)

The illustration/picture pretty much explains it all. Once you somehow sneak the thing in the hole without anyone else noticing (may I suggest getting there a few hours early armed with 18 POPaPUTTs), the POPaPUTT will push the ball out of the hole with its spring loaded mechanism. And no, it won’t automatically go back into the hole and reload itself. You’ll have to disguise it once the ball has been popped out because I have a feeling your friend might do some investigating when he finds that his ball, an inanimate object, suddenly escaped from the hole. Oh, you better not ruin it by giggling or giving him some weird looks. Then it ruins it for everyone.

$18 is a small price to pay for the potential fun/conniving you can have with this toy. If you can’t get any adults with it, take it to the mini-golf place and show your kids how you have magical powers. Alright, that would be mean, but it’s not a half bad idea.