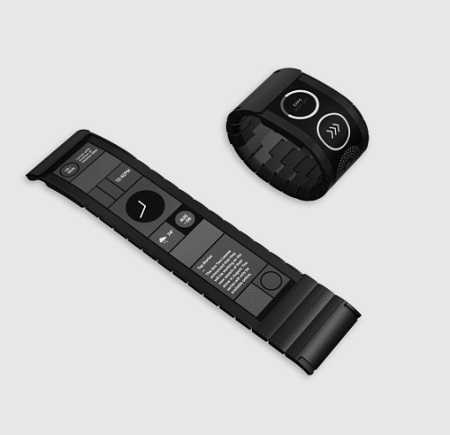 The world of consumer electronics have become so advanced these days, that there are plenty of new developments as well as items that will not fail to amaze any one of us at all. In fact, here we are with what we call the Wove Band from the folks over at Polyera, which is deemed to be the world’s first flexible display product. It does seem to be a rather odd claim, as there are other flexible displays out there, but perhaps those have not been fully developed to realize their commercial value, and we also have curved displays, especially on the higher range TVs that are in the market as well as smartphones like the Samsung Galaxy S6 edge. Well, back to the Wove Band – it features a flexible display which can either be flat or wrap around a wrist, now how about that for coolness?

I do wonder whether those of you who happen to be old enough will be able to remember the metal wristbands that are straight, but you can slap them onto your wrist and it will curl up to remain in place. Well, hopefully the Wove Band will see steps taken in a similar direction some time down the road. In fact, Polyera has opened up submissions for free developer units from next month onward with the first units all set to ship in December to a select group of artists and developers. They also have plans to roll out a commercial launch in the middle of next year.

The kind of technologies behind the Wove Band would be Polyera Digital Fabric Technology and E Ink flexible electronic ink film. The former happens to be a unique set of materials, tools, and know-how designed to enable the production of flexible electronic products at scale, and it is now possible to do so thanks to 10 years of development, spanning fundamental science, engineering, and design.

The Wove Band will boast of a flexible, low-power touch display combining Polyera Digital Fabric Technology with E Ink’s flexible and reflective electronic ink film. There is not much else that needs to be said about E Ink’s film, as it has long been proven in production and used in millions of displays. The bi-stable nature of E Ink’s electronic ink will enable displays to consume no energy at all at the same time retaining a static image, now how about that?