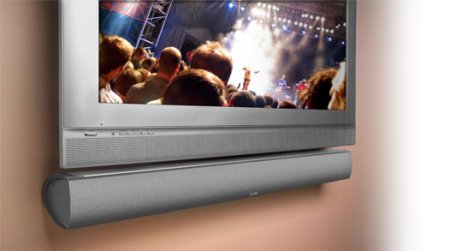 According to Polk Audio, the SurroundBar 360 DVD Theater was developed in response to consumer demand for true surround audio and deep bass, all from a single cabinet. This has driven the engineers at Polk Audio to come up with this masterpiece, where the sleek, gloss black enclosure will most probably make itself an item of attraction in just about any home. With flat panel displays becoming the norm these days, the SurroundBar 360 DVD Theater is almost a sure bet for those who want to beautify their homes. Thanks to Polk’s proprietary Stereo Dimension Array technology, audiophiles will be able to enjoy full 360 surround sound technology, all from the comfort of their own home.

Features of the SurroundBar 360 DVD Theater include a new active version of SDA technology that “combines signal processing and acoustical geometry to create 360 surround from the SurroundBar 360’s eight drivers”. In addition, Polk’s patented Power Port Bass Venting System makes sure that you get clean, low distortion bass without the hassle and additional clutter of an external subwoofer. According to Al Baron, Product Line Manager, Polk Audio, Inc., “Consumers who invest in a high-definition flat-screen display understand the difference between average and superior performance, which is why the original SurroundBar compact speakers are such a hit with end-users. Now, with SurroundBar 360, we can offer these same consumers an equally impressive soup-to-nuts amplifier/processor with all the necessary ingredients for high performance home theater without the endless clutter of boxes and cables.” Do you agree with Mr. Baron, or think otherwise? The image you see above is the standard SurroundBar, just to get a better idea of what the final product looks like.