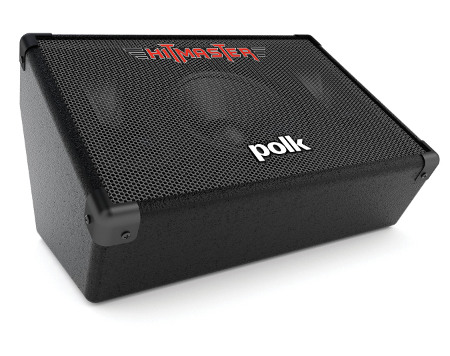 Video games have certainly come a long way since its early Pong days, where the only kind of audio you got was that of musical ditties at best. Apart from beeps and digitized chirps, gameplay and graphics had a much more engrossing hold on the gamer. Of course, this has changed over the years with the advancement of technology, and games these days are really the complete package with lifelike graphics as well as realistic audio cues. For those who have played music-based titles such as Rock Band and Guitar Hero, you will know just how important audio quality is to you, which is why Polk Audio has come up with a brand new speaker known as the HitMaster, bringing your gameplay to a new level of depth and detail.

In order to celebrate the availability of HitMaster, Polk is feeling extra generous by giving away one free music game every single day until April 15. You don’t even need to buy anything at all beforehand, since all you need to do is drop by www.polkhitmaster.com and enter. Retailing for $99 a pop, the Polk Audio HitMaster debuted at CES 2010 a couple of months ago, paving the way for a new category of gaming stage monitors which was specially designed for use with the latest music-based games. Polk Audio believes that once you have tried out their HitMaster, you won’t ever go back to regular TV speakers again, especially if you play lots of Guitar Hero and Rock Band.

HitMaster can be purchased from Polk Audio dealers as well as online, where it comes with a single-point stereo design that comprises of a couple of 2.5″ x 5.5″ horns with two 1″ neodymium tweeters surrounding a 6.5″ woofer. All of those are housed in a cabinet which measures 14″ x 9 1/2″ x 8 1/2″, tipping the scales at 13 lbs. The use of single-point stereo by HitMaster results in a wide, immersive soundfield which will bring a live concert sense of realism to the latest crop of music-based games. If you want to rock the house, the HitMaster is equally capable, playing loud, clear and detailed audio, pumping out 100 Watts maximum, 80 Watts RMS, with total frequency response rated at 40Hz-20kHz. Maximum PL is rated at 103dB 1M/1W. Other connectivity options include line-level inputs and outputs for daisy-chaining two or more monitors.