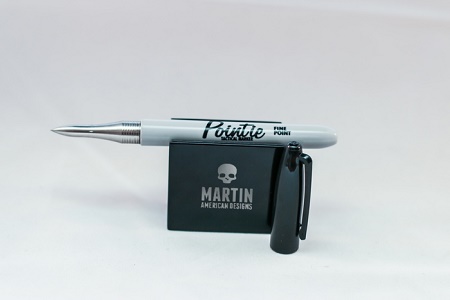 Let’s be honest with ourselves for a moment. There are times when our inner pacifist, who wants love and peace for the world, goes flying out the window. This is normally when we’re in a situation that is fight or flight, where your life might actually be on the line based on how you react. This can be dealing with a wild animal while camping, someone trying to mug you, or getting lost and needing to get hold of your own food by way of the land.

This is especially the case if you live in a big city, as crime is more likely to happen where there are more people. These instances are usually extremely rare, but they are a possibility. If you aren’t comfortable with the idea of carrying around mace or a Taser because of the lag time turning on or opening them, then maybe something like the Pointie Tactical Marker would give you more comfort. This looks like a Sharpie pen, but is made of stainless steel, which would certainly cause a fuss if jabbed into another person who was trying to harm you.

Of course, there are better functions for it aside from being a self-defense tool. This can also be used as a hole punch, engraving tool, glass breaker, and anything else you can come up with. While this will certainly fall under the everyday carry genre of tools, it’s really up to your imagination of what it can do, rather than having several specific tasks that it can accomplish. One of these will cost you $25, and you can either get it in black or stainless steel with more of a spike shape or concealed where it looks like, but is most definitely not, a Sharpie pen tip.