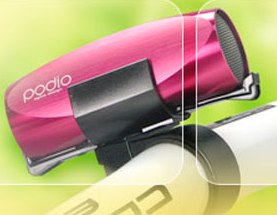 Every once in a while, you will see a biker who likes to pedal with his iPod. As far as I know, there is no law for doing this, but I’m pretty certain that listening to music while biking is going to block out some ambient noise.

While it is completely illegal to drive with headphones, there is another danger of having an iPod on a bike. Those earbud wires could get caught in the spokes, and then cause an accident.

I suppose this is why the Podio has been invented. The Podio is a Taiwanese MP3 player made for the bicycle. As you can see, it clips directly to the bar of the bike itself, and your music will be heard. I’m sure that you can also see that there is a speaker on this, so it doesn’t look like it is really designed for solitary playing. I would imagine that the Podio probably comes with a headphone jack, but it probably shouldn’t be used for reasons that I mentioned before.

So far, the Podio is still under development, and it is planned to have about 20 hours of use after one charge. As for memory, that is going to be at 2GB for WMA and MP3s. What we don’t have is any word on when it will be out.