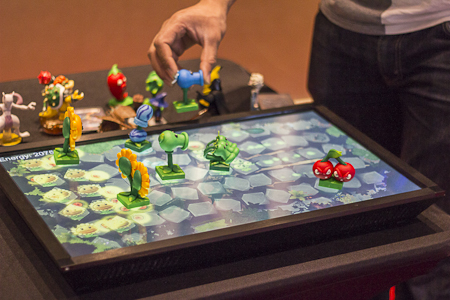 Do you ever get tired of having a million pieces to deal with when playing tabletop games? There isn’t really a way to make things easier because you can’t bring up the game on your computer or laptop without players being too far away from the screen. It’s best to have everything on the table in front of you, but unless you’re willing to put in a lot of work to get it on a huge screen, you won’t be able to play easily with a group.

If you were wishing there were a console specifically for tabletop, then the PlayTable is going to make all your dreams come true. This came to life after some people who loved Settlers of Catan decided it would be fun to add in some LEDs to the pieces, and gradually made it more complex until they ended up making a console. It will not only remove a lot of hassle keeping track of pieces, but also lets you turn your character pieces into playable figures on the system.

It is essentially a screen with the console underneath it, allowing you and 3-4 other friends play without feeling too crowded. Thanks to being at LA Games Conference at the end of last month, I got to see this in action. It’s responsive, has great graphic quality, and is looking like it’s going to be worth the $399 it’ll cost to acquire one of these. You’ll never again have to worry about a lengthy cleanup, and explanations will happen on screen so no one has the excuse of tuning you out and asking a million questions.