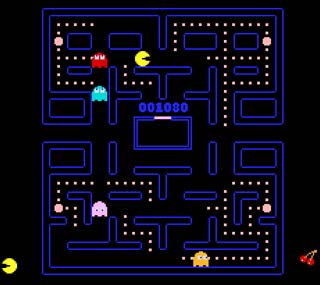 I hope you all remember the arcade game Pacman! It was an arcade game that was a huge hit in the 80’s, so much so that it even took its developers by surprise.

As you might recall, the object of the game was to gobble up as many dots as possible, avoiding the four ghosts (who had names, but I can’t remember them now).

The original Pacman ghosts were computer-controlled, but in this version of the game developed by a Dutch student, Wim van Eck, the ghosts are “controlled” by insects.

Crickets were chosen to simulate the Pacman ghosts because of their small size and the fact that they were fairly active in the maze. As the insects move, they are tracked with imaging software that translates their motions onto the computer screen.

A really cool touch is that when the human player (Pacman) eats an energy ball, the floor under the maze where Pacman is positioned vibrates, simulating the presence of a predator. The natural reaction of the insects is to accelerate their movements away from Pacman, just like the ghosts coded to in the original game.

Wim created the project in his final year of his undergraduate studies. He wanted to see how the unpredictability of nature versus the predictability of the computer would transform the game.

Indeed there were random factors seeded into “Nature’s” version of the game, not least of which was the fact that the crickets soon learned that the simulated predators were not actually a real threat to them and ceased to flee – so there was some intelligence built into the system.