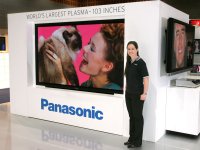 Panasonic will be bringing together its two divisions in new product initiatives, with plasma video displays for cell phones being one of them while AT&T’s recently unveiled Mobile TV service being the other. Today, we shall look at the former, as the very word ‘plasma’ evokes a sense of wonder among buyers as they know this technology is superior to LCD displays in many aspects, albeit taxing the pockets a whole lot more. With Pioneer and Fujitsu already bowing out of the plasma business, it makes perfect sense for Panasonic to strive even harder to capture customers from those companies. It seems that Panasonic’s latest plan would be to include miniature plasma displays in future cell phones – something I look forward to with great anticipation.

It seems that Panasonic engineers have long been working on this new thin, lightweight low-voltage compact plasma display in secret for nearly a decade, and the time is almost ripe to introduce this technology to the masses. Panasonic’s plan is to incorporate miniature plasma displays into both consumer and business telephone products from this fall onwards, going one up against rival OLED displays where brightness, contrast, thinness and cost are concerned. According to Mark Balsama, “Many of our new phones will have vibrant color plasma screens that can run on just 1.5 volts and won’t require any additional wiring or special power supplies. We’ll be able to put plasma in cell phones, business phones, consumer phones, corded phones, cordless phones, and even door intercom monitors and fax machines. We will revolutionize the consumer electronics business, as Panasonic has done many times before.”

I guess mobile TV services had better buck up is plasma display cell phones become the norm in the near future. How much are you willing to fork out for one of these handsets anyways?