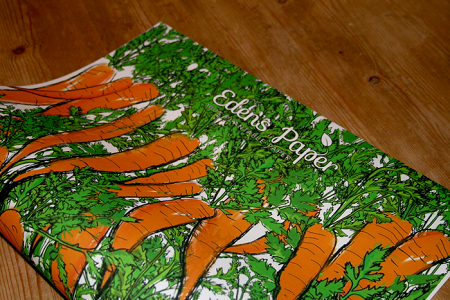 Every time there is a gift-giving event such as a holiday or birthday, there is one thing which there is excess of at the end. Wrapping paper from presents is all over the place, and it will likely be stuffed in the trash, and end up on a landfill somewhere. Thankfully this decomposes, but what if it in itself could be a present on top of whatever it’s hiding? Less trash and more present, sounds great, right?

Eden’s Paper is a plantable wrapping paper that will allow you to stuff it in the ground after you tear it off of your gift. This means it can later become part of your meal. Talk about a gift that keeps on giving! It’s paper that has the seeds of various plants embedded into it. Currently there are only options for carrots, tomatoes, broccoli, chilli, and onion, but there may be more choices in the future. Can you imagine giving a gift in the Spring and having paper that could later become flowers or herbs?

While this crowdfunding campaign is aiming for Christmas, the timing might have been off a bit aesthetically. These have vegetable print on them to signify what they could later become, which doesn’t really fit in with the holiday theme. This is a great idea, but one that will likely be far more sought-after in the warmer months. If you are interested, putting in $20 will get you three sheets of whichever type of vegetable seeded paper you’d like.