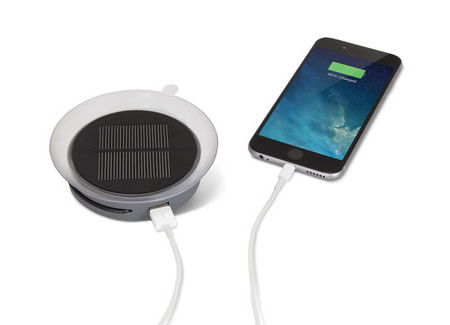 I suppose it is not too wrong to think that the modern buzzword at the moment would be “going green” or being “eco-friendly”. In fact, anything that has four wheels and have the word “hybrid” plastered on it is given the thumbs up, as such vehicles consume far less gas than the average car with a high capacity engine. Well, when it comes to charging up our mobile devices, the power bank is a good idea, but others have decided that a solar powered charger would also be able to get the job done. Enter the $69.95 Plane, Train, And Automobile Solar Backup Battery that is pretty much self explanatory.

From the name itself, you will be able to know that this solar backup battery will work regardless of whether you get from Point A to Point B using a plane, a train or an automobile. As long as the sun shines, of course, it will be able to work just fine. The thing is, on a plane, you would most probably want to close them shades in mid-flight, at least on economy class as the bright light in the middle of the day can be quite a distraction to the other people who are on board. This device’s built-in solar panel charges the internal 1,000 maH lithium-ion battery by harnessing the power of the sun, and it takes up to two hours to fully recharge via USB if the weather is not being co-operative. Five LEDs located on the rim will indicate internal battery capacity.