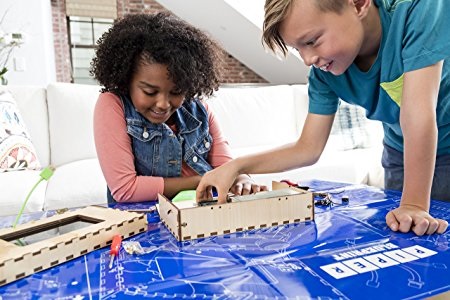 For those of us that grew up when only one computer was in the household and phones were meant for little more than talking, it seemed like magic when the two became one in smartphones, and computers became capable of anything you can imagine. For kids who are growing up today, GPS trackers, smartphones, 3D printers and hover boards are just “how it is”. To make sure that they understand what makes them tick, you’ll have to educate them yourselves, as most schools only have kids learn on computers, not learn about them.

Just to make sure your little ones will be able to understand the basics, this Piper Computer Kit will help them build their first computer and much more. This has a wooden computer case, LCD monitor, Raspberry Pi Edition of Minecraft, and hardware components that they’ll be able to use to solve in-game challenges. The WiFi-enabled gameplay of a title everyone knows of even has extra levels and sharing capabilities so they can show off their discoveries with their friends.

There are LED lights, motion sensors, buzzers, buttons, and switches that will help your child learn how to connect the dots for making a machine, making it work, and having fun in the process. The computer aspect runs on a Raspberry Pi 3 project board with 1GB of ram and a 1.2 Ghz quad-core CPU. This isn’t cheap at $299, but will begin the journey of knowing about and understanding how computers work, which will be priceless information in today’s computer-driven world.