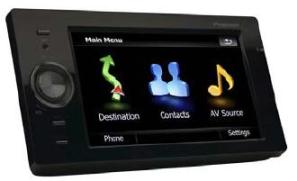 Pioneer wants to get its hands in the auto navigation and auto multimedia market with the creation of the AVIC-F500BT. Pioneer calls the F500BT a “hybrid”, and that word is getting thrown around a lot within the auto industry, it applies to this automotive device as well.

After all, the AVIC-F500BT is a mix of many devices. First of all, it is a fantastic navigation system. There are mapping functions that can be viewed in both overhead and moveable 3D. The screen is a 5.8 inch touchscreen, and the directions are text-to-speech enabled by street. The database includes maps of the United States, Canada, Alaska, and Hawaii.

Second, the AVIC-F500BT is a Media Center. There is an auxiliary audio input for personal audio and communication devices. It can accept portable devices with a USB connection and SD memory cards. As soon as anything is attached, such as a memory card or iPod, it will recognize it for the user to interface.

The AVIC-F500BT also has the advantage of voice control that allows users to control their iPod players and Bluetooth enabled cell phones. The voice controls for the music allows for such commands as “Play Rolling Stones”, and you can even specify an album. As for the vocal phone commands, all a user has to do is say: “Call John Smith”, and the F500BT will ask the user which specific phone number: mobile or home.