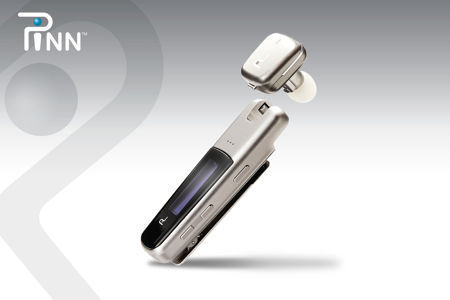 Answering a phone call on your mobile phone used to be very simple — all that you needed to do was to pick up the handset and then press the answer button. Well, driving while talking on the phone became more and more commonplace, which was when the introduction of a hands-free car kit came in handy. Of course, that also meant wrestling with tangled wires after a while, which then saw the advent of Bluetooth headsets that offered wireless connectivity while making you look futuristic. There has been improvements in the Bluetooth headset department, and Pinn would like to forge a new frontier by bringing the convenience of a hands-free Bluetooth headset to a whole new level. We can see this working great in a car, similar to what you’d get with a Bluetooth transmitter.

Pinn is touted to be the first go-anywhere, do-anything, instant-access mobile phone clip, and how does it work? For starters, it will surely impress many with its OLED display, where it merges the main features of a user’s mobile phone into a single, go-anywhere clip. In essence, Pinn will enable users to figure out just who is calling, letting you answer the call, or if you would like to rock to your favorite soothing tunes, you can enjoy them over the Pinn with your connected smartphone stashed away somewhere out of sight.

Right now, Pinn is a Kickstarter project that should it be fully funded in time, then it ought to be able to see action in the market some time later this October. Playing nice with both iOS and Android platforms, the Pinn will allow users to make a call or reply to text simply by activating voice commands via Siri or Google Now. You can also check out who’s calling, charge on the go and customize preferred settings. Not only that, Pinn is so versatile that the active fitness enthusiast, the on-the-go business executive, daily commuters, or the mother with her hands full, will not have issues with keeping Pinn in place since it will clip securely to just about anything, including clothing, purse straps and backpacks.