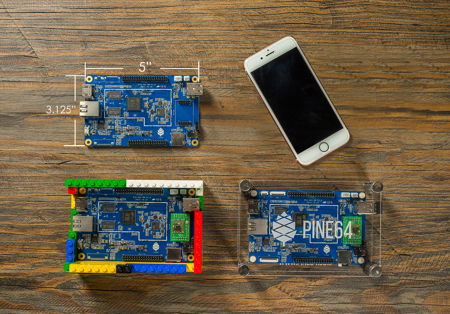 Kickstarter is definitely a hotbed of innovations, although one cannot deny that there will be some duds from time to time. As to what makes a particular project tick compared to the rest, this cannot be determined in a particularly empirical and scientific manner, but rather, it is more or less a case of the right timing. Having said that, if you have heard of the Raspberry Pi that has seen action in many a DIY project in the past, surely you would be stoked to know that here we are with something that is more powerful – the Pine64 single-board 64-bit supercomputer that has just launched on Kickstarter.

There will be not one, but two powerful 3.125” x 5” 64 Bit Quad Core supercomputers with prices starting at $15 a pop – the Pine A64 and the Pine A64+. The versatile single-board computer happens to be an open source platform that will work with both hardware and software, without shirking away from a fight as it can run even today’s most advanced 64 Bit version of Android Lollipop 5.1.1 and Linux. The Pine A64 can be said to be the foundation for one to construct one’s next computer, tablet, gaming device, connected home, 3D printer or anywhere your creativity takes you.

The Pine A64 can be said to be a simple solution when it comes to highly affordable DIY projects, especially if one would like to dive into the world of coding and programming. Imagine building your own computer – now how proud can you get after achieving that? It can also be used in a 3D Printer control panel, video game console, 4K streaming media player, robotics project, connected home device, among others. Features of the Pine A64 include a dual core Mali 400 MP2 GPU, 512MB DDR3 SDRAM, a microSD memory card slot, an 10/100 Mb Ethernet port, a couple of USB 2.0 hosts, 4K high-definition video playback, 4K x 2K HDMI port and multi-channel audio output, Bluetooth 4.0 with 802.11BGN connectivity optional, a 3.5mm Stereo Output mini-jack with microphone support, and a built-in 3.7V Lithium Battery.