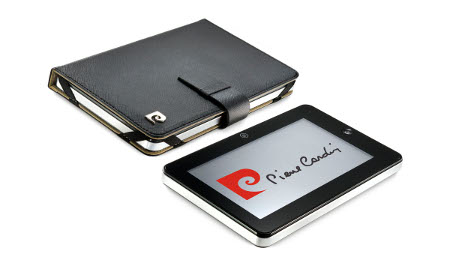 Great – it seems that French fashion house decided that selling clothes – nay, fashion, is not good enough for their bottom line that they have decided to venture into the world of consumer electronics – the tablet here in particular. Yes sir, don’t you think that these are worlds apart? I mean, you don’t see Gucci or Versace taking such a step – either the management at Pierre Cardin are visionaries, or they have lost the plot.
Still, let us see what they are able to churn out on the electronics front other than belts and dapper shirts. Aptly named Pierre Cardin tablet PC, this is the UK’s first, where it will obviously be easy on the eyes (guess the aesthetics are influenced by their experience in the fashion line) alongside user-friendly technology that rides on the Android operating system from Google – no idea on which version it runs on though, but we’re betting it isn’t Honeycomb.

Originally conceived to meet the needs of brand-conscious technology users, the Pierre Cardin Tablet PC is touted to be part of your everyday life, being an essential accessory that you cannot live without. That’s the direction Pierre Cardin is heading towards, but as we all know by now, looks are not everything – it needs to have a reasonable amount of substance in order for it to work, and work well.
Very little else is known about the hardware specifications even through the product page, but we do know that Pierre Cardin’s attempt at a tablet PC will let you remain connected via a wide range of messaging, social network and email options. You can also indulge in a little bit of gaming if you want to, all the way to downloading films and TV shows, output video via HDMI, supporting 3G and Wi-Fi connectivity, and carrying a USB port as well. The price to pay? £275, and something tells me this won’t be a bestseller. What do you think?
Press Release