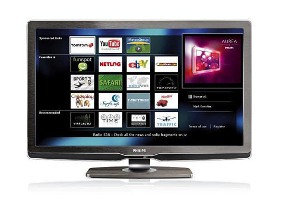 I don’t know about you, but I hardly use my television to watch any show at its normal network broadcasting time. Yeah, practically all my television watching is done from my computer on sites like Hulu instead of the TV. It is no wonder that companies like NetGear are inventing applications like the Internet TV Player to link your computer to the TV for online TV watching.

It appears that Philips has decided to invest in this new Internet TV market with their new Net TV application. Net TV allows a user to access many websites from their television including YouTube, Funspot, TomTom, MeteoGroup, MyAlbum, Netlog, and even eBay.

The user can access these sites conveniently from their remote. This application is to be used on the 8000 and 9000 series of televisions. The 8000 series will require a wired Internet connection, while the 9000 will be completely wireless.

Yes, I have been seeing a lot of Internet applications for the television, but honestly, I have seen very few of these applications have an actual Internet browser on them. Personally, I think electronics companies of every kind should just attach full Web access to every TV so you can surf the net and watch TV.

Net TV is slated to go live in April, and it will no doubt develop some more terrific sites to access after that.