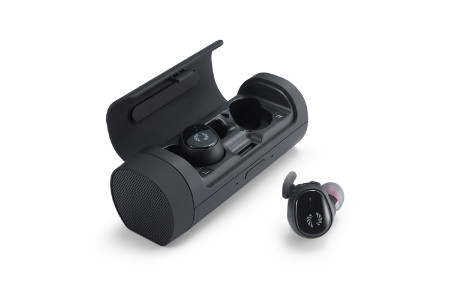 Phiaton, a company that continues to uphold high standards when it comes to high-performance personal audio products, has broken new ground yet again with the Bolt BT 700. Having absolutely nothing to do with the world’s fastest man, the Bolt BT 700 lays claim to being the first true wireless earphones with mic in the world that boasts of balanced armature drivers as well as a portable charging case that will also carry the function of a wireless speaker.

This is truly a unique proposition, far better than any other space age design that Phiaton has come up with in the past. The Bolt BT 700’s versatile charging speaker case will be able to provide up to five hours of music playing time on a single charge, enabling it to fully charge the earphones up to three times per charge. Such numbers translate to a total of 20 hours of play time, where the quick charge feature paves the way for one hour of music playing time on the earbuds with a mere 10 minute charge.

Sporting Phiaton’s very own Balanced Armature Technology, Bolt’s custom-made drivers ensure that your ears will enjoy fine-tuned, high resolution audio as well as faster response with impressively detailed sound. All of these work in tandem to be the first of their kind in the true wireless market, where the drivers make each vibrant note come alive so that users are able to experience mid-high frequency tones while getting in all the textured nuances and detail of the original sound.

Touch interface controls and buttons on the earphones are standard for convenient music and call controls, where it works equally well with Siri and Google Assistant in order to deliver hands-free voice commands. Throw in IPX4 sweat and water resistance, and the Bolt BT 700 is ideal for those who love music while working out. It connects wirelessly via Bluetooth 5.0, and for an asking price of $139, the Bolt BT 700 certainly offers plenty of value for money.