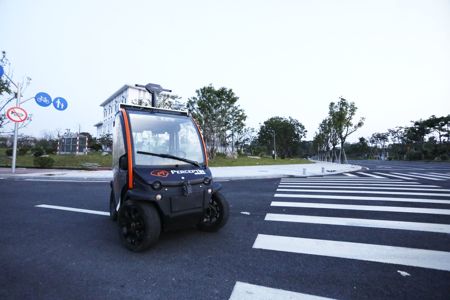 The whole world is moving towards a smarter environment, where smartphones are now considered to be an indispensable part of life in the urban jungle. Vehicles too, have gained plenty from artificial intelligence, being able to brake earlier than expected, warning drivers should they end up being drowsy or start to drift into another lane. A fully autonomous vehicle remains in the works as testing continues, and this has fuelled PerceptIn’s work on the DragonFly Pod. The DragonFly Pod is touted to be the people’s autonomous vehicle (AV), where it comes with a starting price tag of $40,000.

Specially created to work in tandem with PerceptIn’s visual intelligence technology, the DragonFly Pod happens to be the first autonomous vehicle that will bring together a patented vision-based sensor fusion alongside a patented modular computing system, delivering a safe and reliable method of transport in low-speed environments.

Just to make sure that the DragonFly Pod is safe to travel in, it has a top speed of 20 miles per hour. Now that is painfully slow when you take into consideration the “normal” speeds that one would drive at on a freeway. However, do bear in mind that the DragonFly Pod has been designed, at least in this point of time, to function in limited areas/environments such as corporate and university campuses, as well as in places with limited traffic with the main objective of transporting employees and goods. In the future, when imbued with newer technology enhancements, PerceptIn hopes to be able to deploy vehicles suited for high-speed scenarios.

All in all, the DragonFly Pod goes to show how far technology has come in just a couple of years, where connected vehicles continue to grow and advance by leaps and bounds, with autonomous models like this gaining traction and acceptance among the masses.