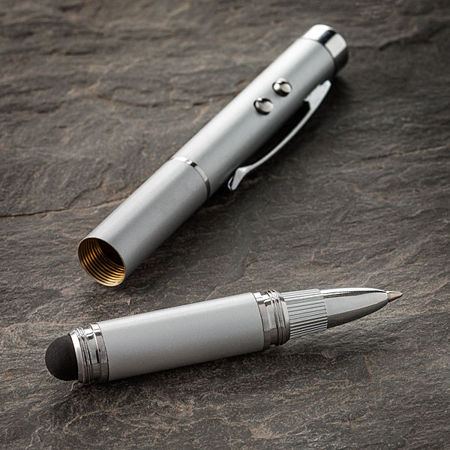 I like the word play that is involved here concerning the $9.99 Pen-Ultimate 5-in-1 Geek Pen & Stylus. After all, just when you have figured out that the only pen which you will ever need is the regular over the counter pen purchased from the local supermarket, using the Pen-Ultimate 5-in-1 Geek Pen & Stylus might just blow your mind and provide a paradigm shift in what a pen can really deliver. This is no ordinary writing instrument with which you place your John Hancock down once in a while, but rather, it also comes with a slew of other operational capabilities that will definitely bring a squeal of delight to geeks alike.

The Pen-Ultimate 5-in-1 Geek Pen & Stylus comes with other features that might come in handy throughout different situations. For instance, they happen to be UV light, a white LED light, a laser pointer, and a capacitive stylus, all crammed into a single pen body so that it ends up being more awesome. You will not be able to find the Pen-Ultimate 5-in-1 Geek Pen & Stylus anywhere else, since this happens to be a ThinkGeek creation and exclusive. Thankfully, this is not a writing instrument that is thrown away once the batteries run out or ink finishes, since both of them can be replaced, with the former requiring a trio of AG3 batteries.