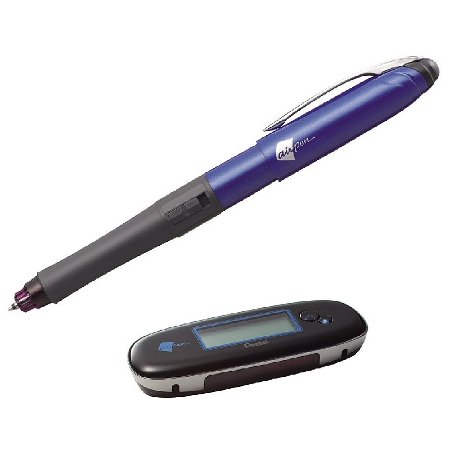 Pentel has something extremely interesting up their sleeves this time around, where what they are offering is definitely different from what you would expect. Instead of the business-as-usual stationery, along ambles the airpenPocket digital pen. Yup, by its name alone, you can tell that this is definitely something more than special.
Just what the heck is the airpenPocket, you ask? For the uninitiated, this is actually a digital pen which is capable of wirelessly transmitting characters as well as images it draws on paper to a computer. To know what kind of technological wizardry lies behind this writing instrument (or rather, inside its chassis), you might as well hit the rest of the post.

For starters, the airpenPocket comprises of a specially designed digital pen and a memory unit, where it will feature Bluetooth connectivity as well as the ability to receive and send data. Whenever you use the pen to take down a note, it will automatically record whatever was written in the memory unit thanks to Pentel’s original method (ultrasound infrared). All relevant data will then be transferred over to a computer through Bluetooth.
This wireless setup is a dream for most folks, but like most other good things, they do come from humble beginnings. The airpenPocket’s predecessor relies on a USB cable for data transmission between its memory unit and a PC, so fitting the successor with Bluetooth connectivity is a no-brainer. Pentel hopes that the wireless capability of the airpenPocket will expand further the use of the pen with mobile devices.
Pentel hopes to have the pen play nice with smartphones and tablet devices that have Bluetooth support as well, and intends to roll out applications for Android-based devices from early March this year onwards. All saved data will end up on the server of Evernote Corp’s “Evernote” crowd service with but a click. This means the combination of an airpenPocket and a smartphone will make it possible to save a handwritten memo using Evernote’s service even if you are not at home, how now about that?
Just make sure the airpenPocket has enough juice left before writing down a really, really long thesis lest the dog eats your homework and you have no softcopy backup.
Source: Tech On