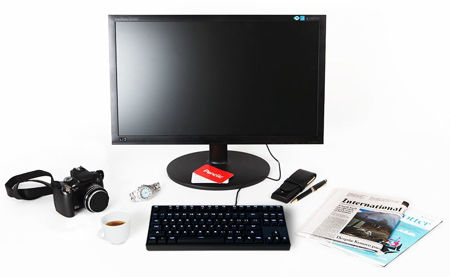 The name of Penclic should not be a stranger to many of us, especially southpaws who do happen to find dedicated left handed devices a whole lot more easy to use as opposed to models which have been released to cater for the majority group in the world – right handed folks. Their special left-handed Penclic mouse was certainly a sight to behold, and this time around, we are treated to something which will target road warriors as well as busy people alike who will not tolerate anything less than perfection – the Penclic MK1 mechanical keyboard.

The Penclic MK1 mechanical keyboard happens to bring about several elements that are deemed important for any computer user – it delivers smart ergonomics so that you will not end up too tired after a particularly long day in front of the computer, hammering away at the keyboard, Scandinavian design and high-end functionality, all rolled into one. Not only that, this latest addition to the Penclic range would boast of spring-activated keys, which have been specially designed to allow users to type extremely fast, which is an essential feature for high performance tasks. There is also the “tenkeyless” design that does away with the need for a numerical keypad, further reducing the keyboard’s footprint so your mouse is in closer reach.

It is truly comfortable when it boils down to the overall feel where the Penclic MK1 is concerned. Apart from supreme comfort, it will also be able to stand up to rigorous use even during late hours spent at the office. There are brown mechanical keys which are quieter, more tactile, and easier to trigger. A separate switch in each key would pave the way for less typos whenever you are busy during crunch time at the organization. Each key press, no matter how quick, will be registered immediately on your screen, which means pressing multiple keys at once will actually show up and instead of “ghosting”” or disappearing. The Penclic Professional Typist MK1 will retail for $139.99 a pop if you are interested.