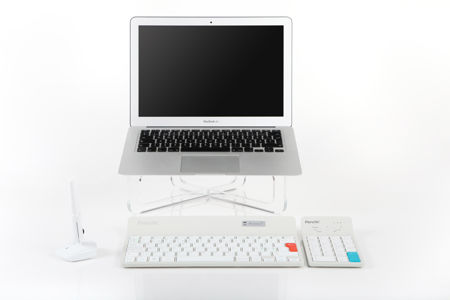 It would take plenty of guts for a company to use a superlative like ‘ultimate’ when it comes to describing their product, and award-winning Swedish company Penclic isn’t shy when it comes to describing their latest wireless workstation to be the ‘ultimate’ model that is in the market. After all, if it is something that can be used while you are on the road, at the office, or right smack in the comfort of your own home, shouldn’t it be deemed to be in such a category? Offering a modern twist on the wireless workspace, this ultimate wireless workstation might just interest those who would like to live an untethered lifestyle.

First of all, a little bit of history. Penclic’s journey kicked off a few years back when they introduced their pen-shaped mouse which offered innovation to a category that did not see a true design change ever since the PC mouse appeared more than three decades back. Since the Penclic’s success, the company has moved on to deliver a slew of other ergonomic computer accessories, ranging from the next-generation Bluetooth Mouse B3 to the Wireless Mini Keyboard K2, and now, a brand new numpad. This would complete the wireless setup as the compact size of the keyboard and numpad work in tandem to centralize your position, while the mouse’s design would enable one to make use of your fine motor skills, all the while reducing the risk of picking up Repetitive Strain Injury (RSI).

The Penclic wireless workstation managed to achieve a balance in both form and function, and the company hopes that they will be able to create a space where everyday folk would feel comfortable to work in – not to mention find their daily affairs all the more enjoyable. Expect to see Penclic’s wireless workspace on display at CES next month.