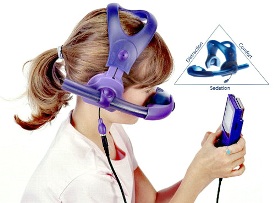 What exactly are we looking at here? Is someone doing a remake of City of Lost Children? No, this is the PediSedate, a Game Boy accessory that is designed to distract kids with portable electronic game playing while they are being sedated for surgery.

Yes, it is a gadget that is needed. If I were six years old, and I had the choice of counting backwards from 100 or playing a Game Boy, I know which one I would choose.

Of course, do you really think that you could get that headgear on a small child without some sort of fight? I suppose that you could lie and say that the part that fits over the nose and mouth is part of the game. You wouldn’t be lying, for the real game is to get the kid to sleep for surgery. There is a greater good principle at work here.

And yes, it is creepy. This is one of those devices that had better not fall into the wrong hands. Note the slogan triangle that reads “distraction, comfort, and sedation”. For some reason, slogans like that always give me the creeps, sort of like the one describing the society of Brave New World: “Community, Identity, Stability”.

In all honesty, I’m not certain if you can get the PediSedate, but it definitely shouldn’t be purchased without a license. Apparently, this device is or was real, and many gadget blogs are reporting on it in celebration of Game Boy’s 20th anniversary.